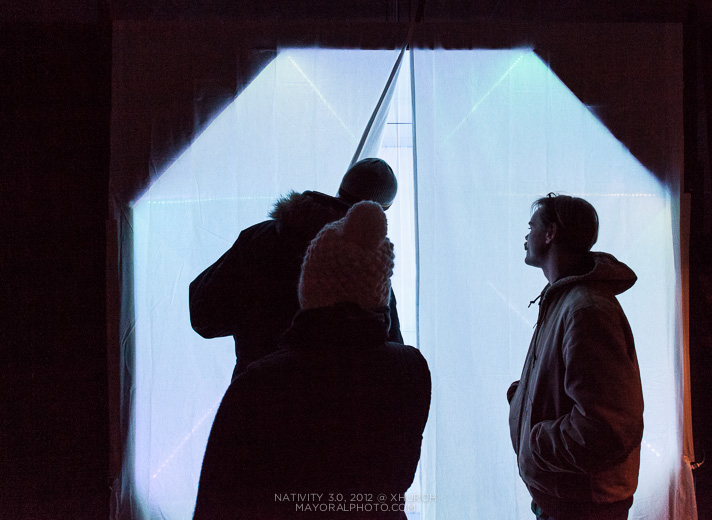 NTVTY 3.0 is the most recent iteration of an installation created by Matt Henderson and Xhurch, this year including contributions from Seattle’s Hair and Space Museum, performances by Cloaks and MSHR.

“Rounding out a three-year effort by Xhurch to explore, scramble, dilute, and REDEFINE the staid tradition of the Christmas nativity scene, this year’s installment will shepherd you into an uncanny digital beyond.

Planned in conjunction with Seattle’s reputed Hair and Space Museum and featuring contributions by Brenna Murphy, Rachel Hibbard, Van Pham, Lymay Iwasaki, Amanda Griffin, Chris Spenser, Troy Micheau, Isaac Frost, and other talented locals, Nativity 3.0 promises to “top out” in both conceptual scope and visual splendor. In 2010, Xhurch staged a quaint and traditional Christmas Nativity which drew friends and a few neighbors. Last year, Alien Nativity attracted hundreds of visitors and garnered international media attention with its kitsch extra-terrestrial motif. This year’s installation presents a visual feast while riffing on topics like Infinity, The Coming Technological Singularity, Immortality (through technology), modern Spiritualism and THE END OF THE WORLD AS WE KNOW IT!”

Written By centralmeridian On December 22, 2012